Grand Marais Outfitters was originally built in the 1890’s as Hugh Logan’s Superior Sample Room. It also housed a popular meeting room on the second floor. It then became     the Palace Theater where popular silent movies of the time were shown from the 1920’s to the 1930’s. It later became a tavern followed by several restaurants, “The Cozy Corner” as well as the “Seagull Cafe”.  Today, the building is one of the historical buildings in Grand Marais on the Historical Society’s register and on their walking tour.

Kim and Dennis Weaver began construction on the building in May 2009 and the building was completed in December, 2011. As a green renovation and rebuild, the building is solar powered. 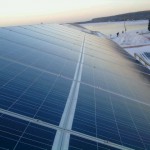 Many parts of the former building were recycled and re-used and eco-friendly materials were used whenever possible. Kim and Dennis took the building from it’s original construction in the 1890’s and brought it to the point where it will be stable and efficient for generations to come. 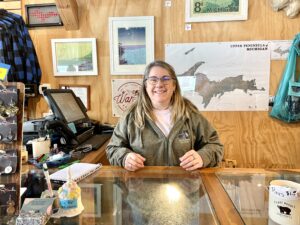 Jeannie is looking forward to continuing to provide customers outerwear, gear and supplies to help visitors enjoy all the beautifully adventurous seasons Michigan has to offer.